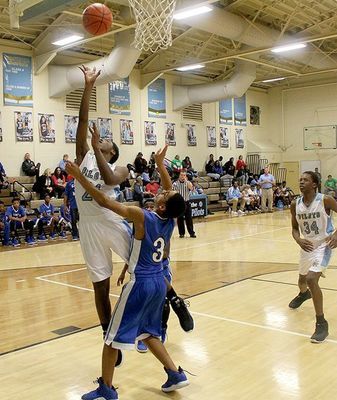 STRONG INSIDE – Jr. Pilot Felix Jackson (21) puts in two of his game high 14 points, during a game against Cairo last week. Jackson led all scorers on the night, guiding Fulton County to a 42-27 win at home. (Photo by Charles Choate) 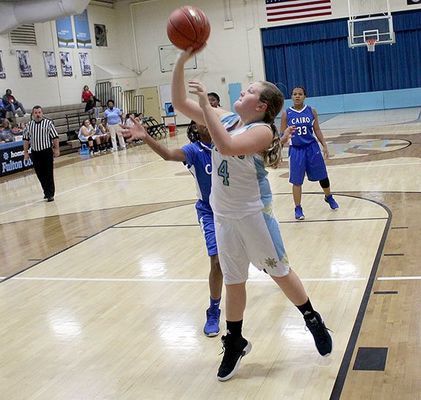 PUSH SHOT – Fulton County Jr. Lady Pilot Hannah Murphy (4) gets in a baseline shot, during their game last week against Cairo. The visiting Jr. Lady Pilots from Illinois came to Hickman and posted a 44-33 win, dropping Fulton County to 3-11 on the year. (Photo by Charles Choate)
Previous Next

The Jr. Lady Pilots fell behind early and lost to the visiting Lady Pilots, while the Jr. Pilot boys continued a strong year with a 42-27 win.

The Jr. Lady Pilots from Cairo jumped out to a 20-5 first quarter lead, and never looked back in posting the 11-point win on the road.

Fulton County did have a strong second quarter, outscoring Cairo 11-7 to cut the halftime advantage to 27-16.

The biggest lead of the night for the visiting Jr. Lady Pilots came at the end of the third quarter, with a score of 39-23.

The Lady Pilots cut the lead to 10-points, 41-31, with 2:05 remaining in the fourth quarter, but that was as close as they could come in the game.

The double digit scoring of Wesley Brown and Felix Jackson guided Fulton County to a win at home.

Brown led the way with 14 points, and Jackson 10, as the Jr. Pilots maintained a 16-9 halftime edge.

The game remained close at the end of three quarters, 25-22, but Fulton County ran out to a 17-5 scoring spurt in the final period to seal the victory.