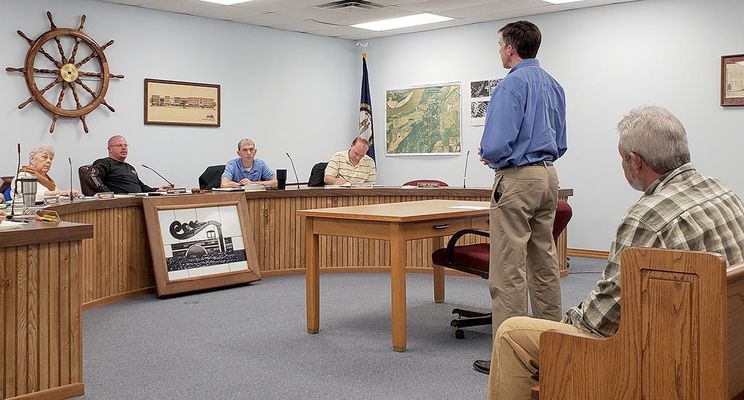 UNDER NEW MANAGEMENT – The City of Hickman Water Plant and Wastewater Plant are under new management effective Feb. 1, under Alliance Professional Water and Wastewater Operations of Missouri. Standing, Tim Geraghty, President of Alliance spoke to Commissioners on Jan. 30 about plans Alliance has for the city water system. A crew was coming to town Feb. 1 to find leaks, with another crew to be in town Feb. 4 to start repairing the leaks. (Photo by Barbara Atwill)

Hickman City Commissioners met in a Special Called meeting Jan. 31 with four items on the agenda, including Executive Session, Discussion on City Manager candidates, Kubota Leasing Options, and an Update on the Alliance Changeover.

In a letter from Chris Johnson, Municipal Law Attorney for the Kentucky League of Cities, in reference to a candidate for the city manager’s position, now serving on the commission, he stated, “as long as the Commissioner has no role in setting the qualifications or hiring metrics for the position and has absolutely zero role in the selection process there should be no issue. You would need to check your local ethics and conflict of interest ordinance to make sure as well. From an optics standpoint it might not be ideal in that the city is looking in-house so to speak. I spoke with several of your folks at COA and know that the city is in a position that they have to hire someone soon and if this would be the best candidate, the city could do this with the understanding that the resignation would be needed from the commission with the hire.”

Commissioner Williams agreed with the terms and did not enter into Executive Session.

When the Commission reconvened, Mayor Carlton stated no decisions or votes were made during the Executive Session.

The Commission voted to extend the deadline for accepting applications for Hickman City Manager while continuing the interviewing process until the position is filled.

It was reported the Kubota Lease, for lawn mowers used at the city cemetery, will expire in May, and Kubota needs a 90-day notice of the City of Hickman’s intentions before the contract expires.

Options include renewing the current contract, returning the mowers and entering into another lease option, or seeking bids from different companies.

The Commission voted to turn in the equipment at the end of the lease period and take bids for new lease options.

Tim Geraghty, President of Alliance, Professional Water and Wastewater Operations, along with Brian Tveitnes, Manager and Human Resources, who is working with employees to get them signed up with their time sheets and benefits; and Willie Caton, local manager, who is working with staff, were present for the meeting.

Mayor Carlton asked, “How many public works employees did you bring on board?”

“Aside from Willie, we have hired three of your current staff members and have a vacancy also, which is a part-time position, we will be advertising, but may not be until the spring,” said Geraghty.

As far as the water plant operation and sewer plant other Alliance employees from other locations will be in town to start up a plan he has been working on, said Geraghty.

Geraghty reported Alliance had two people ion Hickman Feb. 1 and three on Feb. 4, working on leaks, many of which had already been identified.

Leak detection equipment was brought in to look for more leaks Friday, before they started to dig Monday.

“Our full time operator, Jody Yonts, current city employee, will continue to work the water plant and the other two, Glen Dickerson and Elgin Infinger, will be out and about. These are the three we hired from the city,” stated Geraghty.

Carlton asked, “How active do you plan to be with the water plant upgrades?”

“Typically, we like to be involved from the very beginning. We would be the ones to suggest what the plant needs, equipment upgrades, replacements, or repairs. We will continually keep you up-to-date what plans need to be made, and capital improvement. We don’t do engineering design, but we like to keep in close contact with the engineer you hire to make sure their designing something not bigger than what you need, also something user-friendly,” Geraghty said.

Commissioner Adams asked, “Is everyone licensed for the water plant and wastewater plant?”

Geraghty answered, “We have one licensed for the water plant and three will be taking the test for Kentucky. They are licensed in other states including Tennessee and Missouri, so the fastest way for them to get licensed in Kentucky is to take the test and are confident all three will pass the test.”