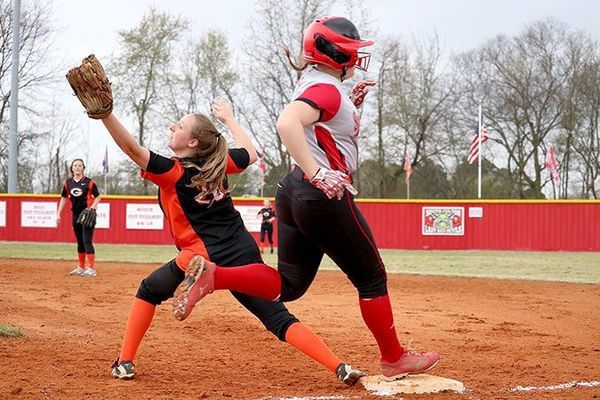 South Fulton Lady Red Devil Erin McDaniel takes her base during South Fulton’s win against Gleason at home April 4. The Lady Devils came out on top, and also recorded a win when they hosted Greenfield the day before. (Photo by Jake Clapper)

The Lady Red Devils fell behind in the first inning as Gleason took the lead early 0-2.

Gleason attempted to gain the lead back in the fifth however they could only find a way to score one run. The Lady Red Devils added another three runs bringing the score to 8-4.

The Red Devils added their final three runs in the bottom the sixth making the score 11-4.

Gleason tried one more time but the could only score two more runs in the top of the seventh.

Buchanan also had a huge offensive night along with Amber Lemon, both went four for four on the night.

Lemon had three singles and a double and scored twice.

Buchanan also had three singles and a double scoring twice. Buchanan had two RBI for the night.