Young Leaders in Action recognized by School Board

YOUNG LEADERS IN ACTION RECOGNIZED – Fulton County Middle School students participated in a project identifying the Fulton County Courthouse in need of repairs. They put a plan in motion and approached the Fulton County Fiscal Court with the plan of adding an extra filing fee to court cases and using these fees to help with renovations needed at the courthouse. Young Leaders pictured during a presentation at the Fulton County Board of Education on April 18 were, from left, Natasha Slinkard, Luke Jackson, Jason Mathews, Kaylee Young, and Board Chairman Rob Garrigan. (Photo by Barbara Atwill). 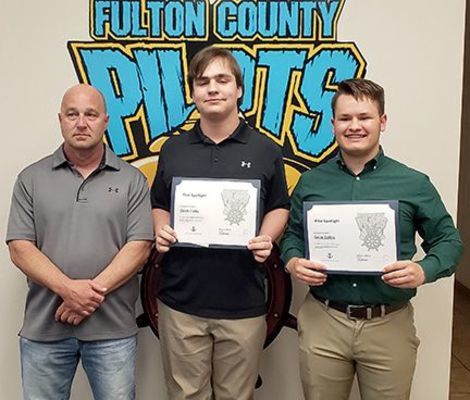 GATTON ACADEMY BOUND – Fulton County High School has two students to attend Gatton Academy at Western Kentucky University during the 2019-20 school year. Three students were interviewed and two accepted into the program. Pictured, from left, are School Board Chairman Rob Garrigan, Caleb Fields, and Caleb Collins, during the Board of Education meeting April 18. (Photo by Barbara Atwill) 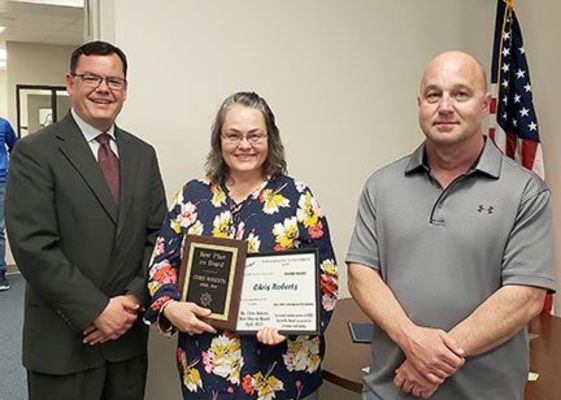 RECEIVES HONOR – Faculty and staff at Fulton County Schools nominated Chris Roberts, teacher at Fulton County High School, for the April Best Pilot of Board, and she was named during the Fulton County Board of Education meeting April 18. (Photo by Barbara Atwill) 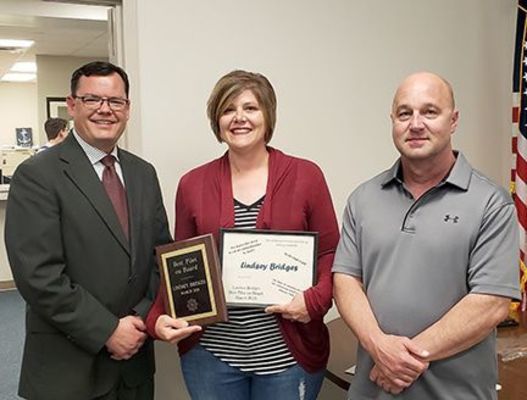 MARCH BEST PILOT ON BOARD – Lindsey Bridges, Food Services director at Fulton County Schools, was named the March Best Pilot on Board during the April School Board meeting April 18. (Photo by Barbara Atwill)
Previous Next

The Fulton County Young Leaders in Action group, including Kaylee Young, Jason Mathews, Luke Jackson, and Natasha Slinkard, were in attendance for the April 18 Fulton County Board of Education meeting.

The students must identify a community problem, come up with a legislative solution and then work to get the legislature passed.

In regard to the project competition, where 10 west Kentucky counties compete, Elizabeth McWhirt, who is a teacher at Fulton County Middle School and coaches the group said, “Coaches do have the opportunity to go in and view the presentation to the judges. I’m the only one that does not go in with the students, because my opinion is, I help and coach them, but I want them to rise and fall on their merits. This group was six points ahead of the next highest group and it was the toughest competition ever held, with seven out of the top category, and three out of the second category. Fulton County was really the best of the best this year and I’m really proud of them.”

Mathews said, “Our project was the Fulton County Courthouse. The courthouse is damaged and needs lots of repairs. Some of you may remember there was a fire around Christmas and has mold on the windows. Our Ordinance adds an additional filing fee, projected to raise $14,000 per year.”

Board members Perry Turner, Rob Garrigan, Kimberly Hagler, Barry Patrick, and Superintendent Aaron Collins attending. Jacob Goodman was absent.
“The Number One high school in the nation is actually in Kentucky. You have to apply for that school and be a student in Kentucky and it is Gatton Academy at Western Kentucky University. Marlena Sipes recently graduated from Gatton Academy and we have two students going to Gatton Academy next year. The Board will take care of the books for these two young men. This is the first time in Fulton County history we had three to be interviewed in the same year, with two accepted. The two young men are Caleb Collins and Caleb Fields,” stated Supt. Collins.

“We are proud of the new heights the 4 Rivers Career Academy is going and students there. We are excited of the recognitions they are receiving at the Career Academy. Recently Dylan Hamond was recognized as Tech Student of the Week by General Contractors of Western Kentucky University. He received a prestigious award and attended a banquet, so congratulations to Dylan,” continued Collins.

Tamra Parker, director of Preschool and Special Education, presented the Board with information about the Preschool program.

“To brag on the Preschool students and teachers, Taylor Greer is one of the shining star Preschool teachers, who has really embraced the new Preschool Assessment. Preschool has several regulations, because we are a blended program with Head Start. We have several guidelines and curriculum pieces and standards to follow,” stated Parker.

“Murray Head Start requires us to use the Creative Curriculum. This is what is used for teaching in the classroom, giving the Preschool students experiences and playing with eight or nine units, very in depth. Kentucky implemented the Kindergarten Readiness screeners several years ago. I think across the state, Kentucky found out the curriculum is missing pieces for the students. Through a grant we purchased the supplemental materials – language and mathematics. The teachers have embraced it and have had professional development classes before school started. We received pieces from another school district. There is a three year old and a four year old assessment,” continued Parker.
“The earlier we can get students in the program, the better we think it is for them and I’m really excited about this,” stated Parker.

Collins said, “I want to commend our Preschool teachers, and for Ms. Greer being here tonight, and Ms. Parker for the work they do. In my opinion, this may be one of the most challenging grade levels we have. I commend the Board for the desire to expand the program. I believe we have more three years old in the program than ever before in the history at Fulton County.”

Fulton County Preschool has received 67 applications for 80 openings, about 50 are already eligible for next year.

“I want to commend Ms. Parker for being the director of special education and Preschool,” stated PaTrice Chambers, Assistant Superintendent.

Roberts stated, “We are so honored for the Board sending students to Oklahoma City to National Convention. Caleb Fields, and Suanna Johnson, who was put on a waiting list for Gatton Academy, have shown brightly at State Beta Convention, and all the good changes the districts have been making over years just keeps on multiplying. Thank you for your support.”

Notification of personnel actions included Michelle McCutchens employed as food service substitute; two resignations, and Chad Parker announced his retirement as football coach and substitute; Sarah Powell, will complete the year, but will not be back next year.

Superintendent’s Report highlights included working on the budget for May 30, bids received for custodial services, KSBA training for hours at the WKAC in Eddyville.

Collins said he is excited about renovations starting soon and the savings of $76,000 from a bid from Ross and Clair and appreciated of our bonding agent Hillard Lyons and the support they continue to show.

The schools continue to move forward, Collins said, with visitors with Kentucky Department of Education Deputy Commissioner Amanda Ellis present April 23, the reading program with RTI at the elementary school, and new skills for employers coming to campus to see the students and Four Rivers Career Academy, build more relations.

Supt. Collins stated, “Diane Owen is not with us tonight, but do want to recognize her. She has juggled three grants this year and has done an extensive and outstanding job and lead a team that has been awarded $15,000,000 in grants over the last five years. The state no longer has supports for computers for ILPs, and we need to find a way, and Bret Owen has written a program for ILPs and will be presenting in a few weeks. Also, for teacher evaluations as well, we really appreciate Bret and Owen Technologies.”

“We also appreciate the work lead by Dale Jackson and Chuck Murphy on the concession stand at the baseball/softball fields. We turned the stand in on our insurance for mold on the inside. The Concession stand is now back up and remodeled and we are grateful for those who helped. We also want to let people know about the Monsanto grant received the Pilot Academy sponsored by Garrigan Farms. We are appreciative of the Garrigans. The Run Pilots Run campaign continues to grow financially and appreciate the Sanger family in memory of Joe Sanger with a $6,500 donation,” continued Collins.

The Board voted to go with lowest bid going to ABM, for custodial services, currently used by the schools. Supt. Collins recommended going with ABM for $177,875 and to continue to improve the services and have a vision and have to live our vision.

The Board, in other business:

• Approved a trip request from the class of 2019 to Busch Stadium, with no money from the School Board.

• Approved coaches’ supplements for 2019-20, with $6,200 for assistant coaches plus bonuses for longevity, and benefits associated. Adding an assistant volleyball coach at the middle school.

“Our insurance agent recommended dropping the terroristic insurance as no other small school, maybe Lexington and Louisville carry it, but no small school carries. The terrorism would have to be certified by the Secretary of the Treasurer and we felt we have been paying unnecessarily,” stated Jennifer Davis, Fulton County Financial Officer.

“The Board requested we look into creating a law enforcement agency and the liability. The cost is $1,000 per year. Take off the terroristic insurance and we are even,” Collins said.

“Andy Blackwell came in and we had misread the quote. It ended up being $725 per mowing without the ditch. It will only be mowed when needed for an extra $100. He will do the practice fields, and not charging for the football, baseball or softball fields. This responsibility, as stated by the Board and myself, is Dale Jackson’s. Improvement wise in terms of how the property looks is quite impressive, and we don’t even know when they are in and out. There is no stoppage of instruction and working to know when the students are on the playground as to interrupt,” stated Collins.

“If it is OK with the Board, Davis can do a cost analysis on employment of people we have done in the past and have in the job description for future. We do have the cost to the District over the last three years, how much fuel for mowing costs at our disposal. We can figure and we also have maintenance for mower and blades,” stated Collins.