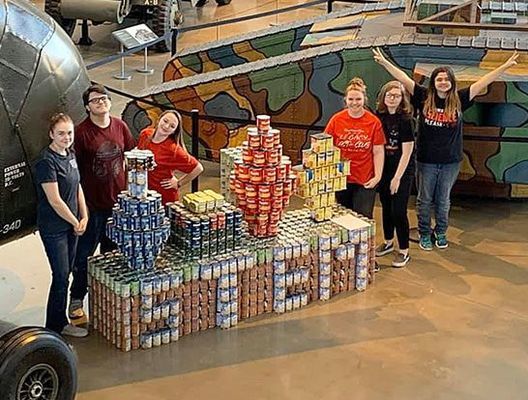 Discovery Park of America, in Union City, Tenn., hosted 10 teams from nine area schools in the third annual Canstruction competition Nov. 1. The teams created unique sculptures made almost entirely of cans that will be on display throughout the museum during the month of November.
According to organizer Andrew Gibson, assistant director of education at Discovery Park, a CanStruction competition at the park was a dream of co-founder Jenny Kirkland. “Mrs. Kirkland saw an exhibit like this in Memphis and asked that we host this event in Union City,” Gibson said. “She really loved the idea that it allowed students to express their creativity while learning about engineering, science and math.”

Canstruction is an international charity competition where architects, engineers, contractors, teachers and students they mentor, compete to design and build giant structures made entirely from full cans of food. At the close of the competition all of the food is donated to local food banks where the competitions are held. Canstruction was founded in 1992 by Cheri Melillo and has since raised millions of pounds of food for food banks in participating cities across the world. With more than 170 cities and over 30,000 volunteers participating in Canstruction competitions, it has grown to become one of the largest food drives for food bank donations in the world.

In addition to creating a unique and interesting exhibit at Discovery Park for the month of November, the 13,933 cans will be dismantled on Dec. 1 and donated to three area charities for distribution in December. Chimes for Charity and Helping Hands in Union City and We Care Ministries of Martin, Tenn. will each receive one-third of the cans.
A portion of the cost of the cans is paid for by the event sponsors, Westan Insurance Group and Allen Searcy Builder Contractor. Each school is given $500 for cans and is also allowed to fundraise to add additional cans as needed.
The student groups assembled at assigned locations inside Discovery Center and began building at 9 a.m. Friday morning and the competition ended at noon. The teams competed for awards in six categories including Structural Ingenuity, Best Use of Labels, Best Meal, Most Creative, Juror’s Favorite and the coveted Best Overall. This year, NWTN Homeschool won Best Overall.

The structures will be on display through Nov., 30. Discovery Park of America is located at 830 Everett Blvd. in Union City, Tenn.and has a mission to inspire both children and adults to see beyond. For more information about exhibits, upcoming events or how you can become involved in the park’s mission, visit www.discoveryparkofamerica.com/

Dorena-Hickman Ferry to remain closed through A...