Pilots shut out by Tigers

PASS ATTEMPT – Fulton County quarterback Jerome Warren (4) attempts a pass, with Murray High defenders Alexander Shultz (57) and Brendan Dahncke (26) pursing the play. The Pilots trailed the Class-2A Tigers 7-0 at halftime, but the visitors made a second half run to win 35-0 at Hickman. (Photo by Charles Choate) 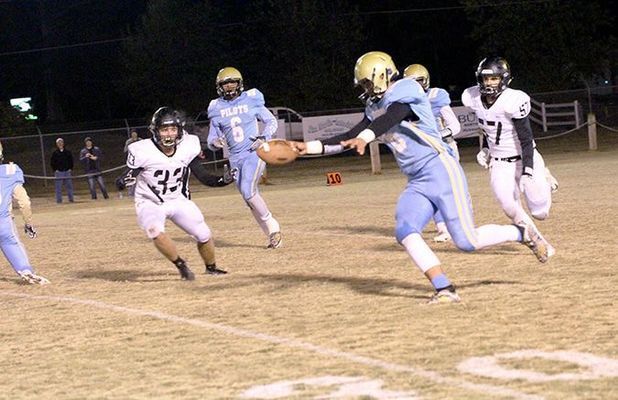 RUGBY STYLE – Fulton County’s Dylan Hammond sets to punt the football, after chasing down an errant snap. The Pilots were forced to punt on multiple occasions on Friday night, as the stingy Murray High defense held them out of the endzone. The Pilots ended regular season play at 6-4, following their 35-0 to the Tigers. (Photo by Charles Choate)
Previous Next

For the first time this season, the Fulton County Pilots failed to cross the goal line in a game.

Averaging 35.1 points per game, the Pilots were shut out by Class-2A Murray High, 35-0, in the regular season finale at Sanger Field.

The Senior Night loss ended the Pilots regular season at 6-4, their best record since also finishing 6-4 in 2006.

“You know, really it is okay,” said coach James Bridges after the game. “We knew this would be a tough game, and we played them to a 7-0 score at halftime. We just got off to a bad start in the third (quarter) and it got out of hand.”

The Pilots defense played stellar against the Tigers in the first half, holding Murray High to a single pass reception score by Tommy Waldrop in the first quarter.

But in the second half, Charvelle McCallister scored three touchdowns, and Sebastian Lawrence added one score.

“This was a really good preparation for the playoffs,” said coach Bridges. “We got a lot of players in the game. We were able to pull some players to keep someone from having an injury. We are healthy now. We are going into the playoffs with everyone ready. Of course we wanted to win this game, but the playoffs are much more important to us now.”

The Pilots offense was stalled by the Tigers defense on the night, with Fulton County managing only 114 total yards.

Running back Caleb Kimble was held to a season low 43-yards on the ground, followed by DiAvian Bradley’s 12-yards.

Broc Bridges caught two passes for 21-yards, with Jerome Warren hauling in one pass for 15 yards.

On the defensive side, Bridges, Dylan Hammond and Webbie Turner had fumble recoveries.

Hammond and Chrisshawn Gordon each had six tackles, with Bridges and Tyler Love adding five tackles each.

The Pilots will now travel to Russellville on Friday to begin the Class-A playoffs.