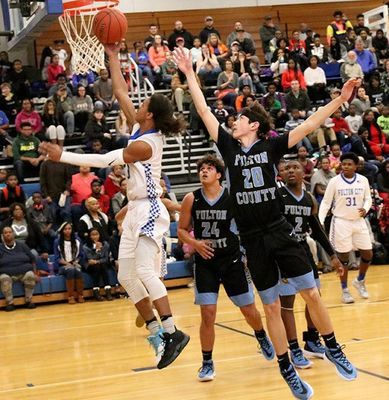 BLOCK ATTEMPT – The Bulldogs Keandre Patton (23) gets a hand on an inside shot attempt by Fulton County’s Caleb Kimble (2). Kimble had a big night for the Pilots with 25-points, but Fulton City posted the district win 57-53 at home. (Photo by Charles Choate)
Previous Next

In a game that went back and forth for most of the four quarters of play, it was the Bulldogs who prevailed with a 57-53 win.

“Anytime you can get a district win against a quality opponent like Fulton County, it is good for the team,” said coach John Dillard. “Frankly, they have had our number for a few years now, but our kids just made the plays down the stretch. I just kept telling the guys to find a way. Find a way to make plays, play smart, and fortunately that is what we did.”

The game started with the Bulldogs taking a 12-2 lead at the 2:25 mark of the first quarter, with Fulton County battling back for their first lead at 16-15, when Caleb Kimble drained a 3-point shot with 3:42 in the second quarter.

The Pilots maintained their lead to finish the period, and went to the dressing room at halftime with a 21-20 advantage.

The third quarter saw Fulton County take their largest lead of the game, 42-35, with :14 to play in the period.

From this point, Fulton City began a comeback with the Bulldogs going in front in the fourth quarter 44-42 with 5:18 to play.

The last run of the night went to the Bulldogs, who sealed the win on a pair of free throws from Cameron Madding with :10 in the game.

“The guys did not quit,” said coach Dillard. “Now, our shot selection late was not what I wanted, but they just did not get rattled or quit. When they (Pilots) tied the game, we could have just folded, but it didn’t happen. We kept fighting and just made enough good plays down the stretch to get the win.”

Dillard said the win was a boost the team needed in going forward.

“Absolutely, absolutely. I think we have learned and grown up enough to know we have to do things well on the floor. One of the things we have learned, and are so much better at, is defending and rebounding. The way we came out of the gate was a real boost to the guys. We knew early that we could play with them, and we came out and got the first lick in. I don’t know if the early 10-point lead had the biggest affect of giving us confidence, or stunning them that we were in charge. I know when they started their comeback, and when they took the lead, I didn’t see any panic from the guys. I think this win was a great motivator for our guys to understand that if we do what we are supposed to do, everything will be just fine. This was a big moment for us in the district race.”