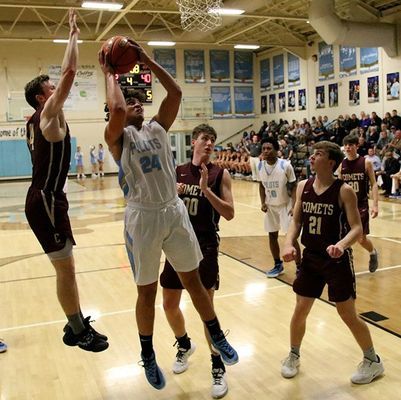 STRONG INSIDE – Fulton County center Dylan Hammond (24) puts in a shot under the basket, as Carlisle County’s Chase Teasley (24) and Daven McGee (21) are on the play. Hammond scored a team high 19 points, but it was the Comets taking the First District game, 58-52. (Photo by Charles Choate)

The Pilots fell to Lake County and Carlisle County, but picked up a district win at Hickman County.

The Falcons avenged an earlier loss to Fulton County with the overtime win at Tiptonville.

The game was close throughout the night, with Lake County holding a 27-25 edge at halftime, and the Pilots winning 41-38 going into the fourth quarter.

The loss dropped the Pilots to 9-10 on the year.

The Comets used a strong third quarter to win the First District match-up on the road.

The two teams played to an 18-18 halftime score, with Carlisle County using a 22-9 scoring advantage in the third quarter to go in front 40-27.

Fulton County won the final period 25-18, but the deficit was to much to overcome.

The Pilots snapped a two game losing streak with the First District win on the road.