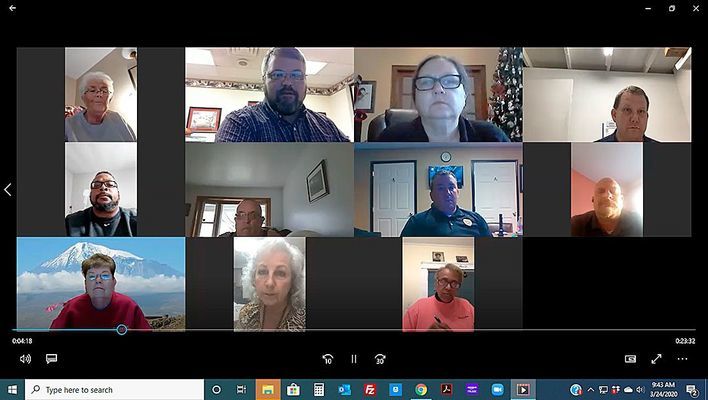 Fulton businesses will have a bit of relief from the burdens of state mandated closures and altered operations resulting from the recent COVID-19 pandemic, with action taken by the Fulton City Commission Monday evening.

During the commission’s regular 6 p.m. session, conducted for the first time using an internet video conferencing method, to maintain social distancing for the elected officials and city personnel, as well as the public, Mayor David Prater, Commissioners Elaine Forrester, Martha Vowell, Jeff Vaughn and Darcy Linn approved a recommendation from City Manager Mike Gunn, to extend the deadline for alcohol regulatory fees and payroll tax withholding to May 31.

Gunn said he and the city’s Chief Financial Officer Lisa Morgan had discussed the option, to allow business owners the extra time, deferred 30 days for payment of the fees and tax, due on April 30, to May 31.

Gunn noted the city’s General Fund could accommodate the extension.

“This is requested that we do this to assist the struggle that our business community is going through,” Gunn said.

The recommendation was unanimously approved.

Gunn said City Clerk Helen Lee would include the deferred payment plan in the notice mailed to businesses regarding the amount owed for first quarter collections for the fees and taxes.

Another item related to the Family First Corona Virus Response Act was approved through Executive Order, by Municipal Order 2019-134, on the first reading by Mayor Prater, with Commissioners’ support.

Gunn explained the actions would allow city employees temporary leave, with eligibility to expire Dec. 31, for self-quarantine, or other circumstances affiliated with the coronavirus outbreak, for employees and /or for employees to care for family members who are quarantined, as well as their children who have experienced school or day closures.

Two second readings of previously read ordinances were conducted, one for City Ordinance 2020-01 Amending Chapter 40, article III, Collection and Disposal of Refuse, Subsections 61, Definitions, 64. Deposits on City Streets, Gutters, Sidewalks or Sewer Rights of Way Prohibited, 75 Enforcement; and the other, City Ordinance 2020-02, to Allow Worship Centers and Ancillary Buildings in all zones under a conditional land use permit granted by the city’s Board of Zoning Adjustments.

“All employees of the city are healthy, and their families are healthy. Child Care has not been an issue with any staff to this point,” Gunn said.

During his report, Gunn updated the Mayor and Commissioners regarding city staff still at work while city facilities are closed to walk-in access to the public, and only accessible by telephone, email or drive-through window. He reported the recommended personal protective equipment had been provided to city staff and department heads were in the process of applying CDC guidance in their respective departments.

“We are working to obtain reserve supplies through the Fulton County Emergency Management, having received a very limited supply for Ken-Tenn EMS, city staff, Fulton Nursing and Rehab,” Gunn said.

“Our city staff is still working to ensure the daily business for the public is being conducted, “ Gunn added.

The commission was updated as to the Fulton Fire Department and Code Enforcement operating regular staffing and the volunteers healthy and standing by.

“We also need to make sure the public is aware that only tissue should be flushed or put into the city’s sewer system. Do not flush wipes or put grease into the sewer system, as this can cause catastrophic failure of the system or damage the pumps,” Gunn said.

City Attorney Allison Whitledge was absent from the meeting.

All elected officials, as well as Gunn and City Clerk Helen Lee, participated in the meeting via remote access from different locations, to join the video conference.

The public was offered access to the video conferencing as well as the media, with a portion of the night’s agenda designated for pubic comment.

Fulton Countians find ways to serve others in m...