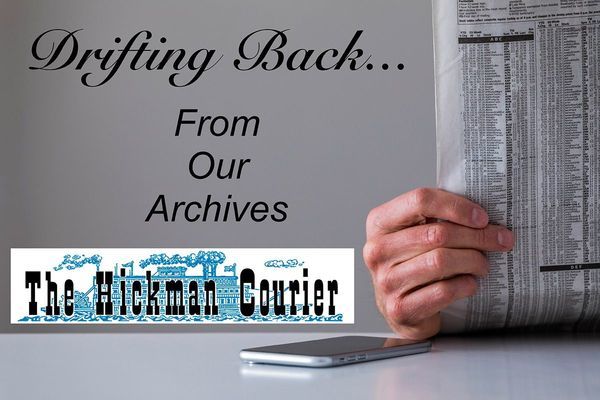 • U.S. Senator Mitch McConnell, congressman Carroll Hubbard, Secretary Gene Royalty of the Kentucky Cabinet for Economic Development, David O. Carpenter, president of Horsehead Industries, and Harry N, Walters, president and CEO of Great Lakes Carbon, were in Hickman July 14, to attend the official dedication of the local GLC plant. After almost three years of negotiations, Great Lakes has purchased the Hickman plant from the German-owned Sigri Carbon Corporation. All the production departments planned to run are now operational. The plant will be staffed by approximately 65 persons. The Hickman plant will produce semi-finished electrodes to be processed further at other GLC plants.

• Pictured: Gerald Roper is shown holding a “History of the Hickman Floodwall” which he compiled. The information was displayed downtown during the Hickman River City 1st Annual Festival. Roper had many request for a copy of the information.

• “The situation is much worse than I imagined,” said Congressman Carroll Hubbard when he viewed the sliding on Magnolia Street and the one near the Hickman water tanks Saturday afternoon. Congressman Hubbard contacted Col. Clint Willer about the cave-in and Col. Willer and his executive assistant, John Howard, scheduled to be in Hickman the first week in August to review the Magnolia slide.

• Mr. and Mrs. John S. Bacon, Sr, will be guests of honor at the reception July 29, in observance of their 50th wedding anniversary. They were married at Sacred Heart Rectory in Hickman on July 27, 1940. They have four children, Mary Bacon Harris, Elizabeth Ciccolella, Agnes Barron and John S. Bacon, Jr., and nine grandchildren.

• A group of local citizens has organized in an effort to keep a prison from being built in Fulton County. Called “Citizens for a Better Fulton County,” they are getting petitions signed against locating the prison here. An overflow crowd attended the Fiscal Court meeting July 24, including many members of the Citizens group. Judy Wilson, a member of the group told the magistrates, “We don’t want to look like radicals, we’re not. We are a group of intelligent, well-educated persons who are interested in Fulton County.” Ms. Wilson told the magistrates that the Citizens group is setting up a public meeting to discuss the prison. She also said that she hoped they would have a better and bigger place for the next Fiscal Court meeting and suggested that the Fiscal Court put ads in both newspapers in the County so that citizens could send in a ballot stating if they are for a prison being located here or not.

• Pictured: Sheriff Bobby Hopper and Kentucky State Police officer J.T. Grant pose with more than 1,000 marijuana plants seized July 24 from five plots in the western end of the county. The plants were spotted by state police aircraft. No arrests have been made in connection with the finds. Also pictured is a state police officer igniting the diesel fuel-drenched plants.

• Tatia Bradshaw, County Conservation District official and others dream of a Fulton County Fair. The success of the upcoming Fulton County Farm Follies will determine whether a county fair remains just a dream or becomes reality. The follies are scheduled for Aug. 26, at the former Cayce School, and will be somewhat like the fictional Cavatica County Fair made famous in E.B. White’s classic “Charlotte’s Web.” Organizers want it to be small and laid-back, a place to meet friends, be entertained, and participate in tried-and-true games, such as skeet shooting, sack races, horseshoes and ring toss.

• Billed as the world’s smallest singer, Lowell Mason will sing and speak this weekend at Hickman’s First Christian Church, located at the corner of Tennessee and Buchanan Streets. A singer since the age of 9, Mason has travelled across America and the world as both a performer and evangelist. Mason , who is 46 inches tall, will sing and discuss his eight-year Bible distribution program in Russia.

• James O. Butts, chairman of a search committee charged with locating a new county economic development director, said he wants someone “with roots in Fulton County” to replace outgoing director Clay Walker. Butts believes this will increase the chances of a new director staying longer, ensuring continuity in the effort to attract new jobs to the county. Joining Butts on the search committee are Economic Development Partnership board members Roger Kephart, Ha Greer and Larry Cardwell.

Letter to the Editor - Marlena Sipes