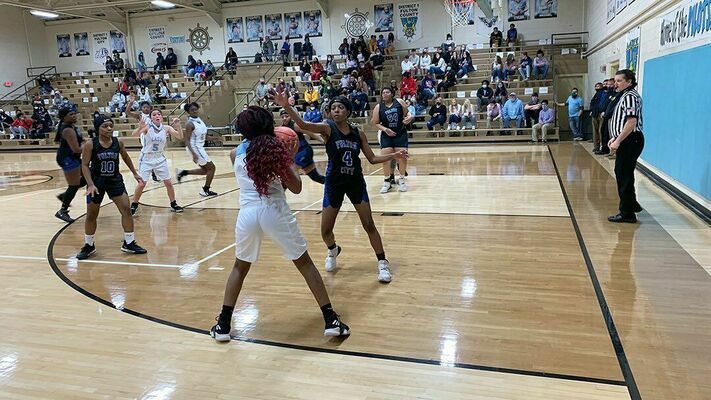 Fulton County High School Lady Pilot Callie Coulson (#5) calls for a pass as she navigates through the zone defense the Lady Bulldogs played during their game Feb. 8. (Photo by Mark Collier) 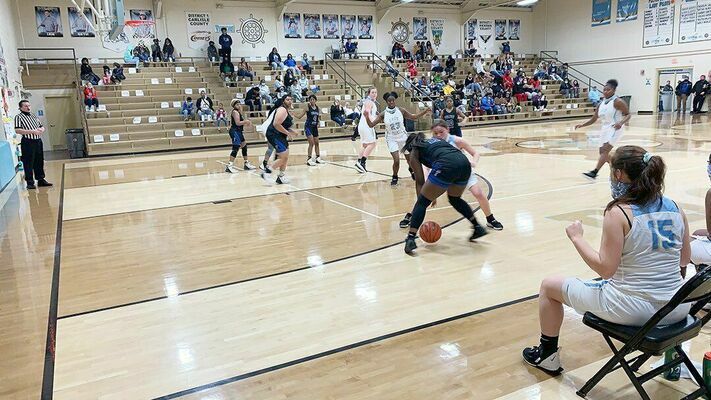 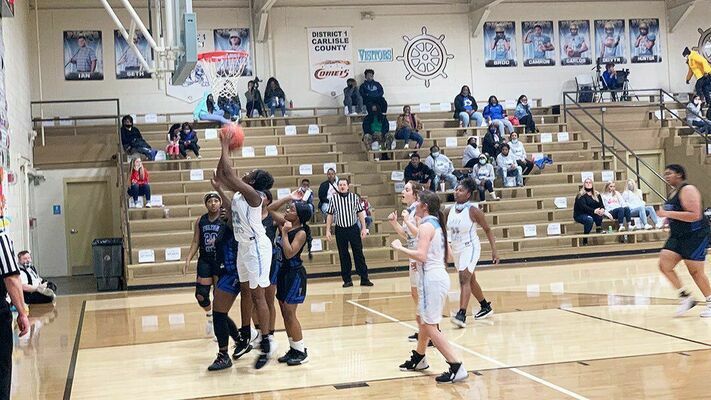 The Lady Pilots are now 1-4 on the season, and 1-2 in First District competition.

The first and third quarters were the difference in the Lady Pilots contest against the Lady Bombers, as Ballard Memorial jumped out early to a 24-13 after one quarter of play.

The Lady Pilots hung around in the second quarter, managing to keep it close as the Lady Bombers led 34-21 as both teams regrouped during the halftime break.

Both teams scored four points each in the final quarter as the Lady Bombers came away victorious, 63-37.

TaKyiah McNeal led the Lady Pilots in scoring with 14, followed by JaMesha Brown, Emily Scott and Hannah Murphy with seven each, and Callie Coulson with two.

Brown led the Lady Pilots with seven of the teams’ 25 total rebounds, followed by McNeal with six, Scott with five, Murphy with three, and McKenzie Smith and Kamesha Windham with two each.

The Lady Pilots and Lady Bulldogs had a hard-fought first half in their district contest Feb. 5, as the Lady Pilots led 19-17 at the break. Fulton County were able to get some separation in the third quarter as they led 31-21 at the end of three, and the two teams both scored seven points in the final quarter.

Brown led the Pilots with 13 points, making the Lady Pilots only two three-point baskets, followed by Scott with 10, Murphy with six, McNeal with five, and Coulson and Charmaine Buntyn with two each.

McNeal had nine of the Lady Pilots 38 total rebounds, followed by Brown and Scott with eight each, Murphy and Coulson with four each, Kamesha Windham with three, and JaMya Pierce and Buntyn with one each.

FULTON INDEPENDENT BOARD OF EDUCATION TO CONVEN...

‘Chalk the Walk’ event set for Thursday in down...