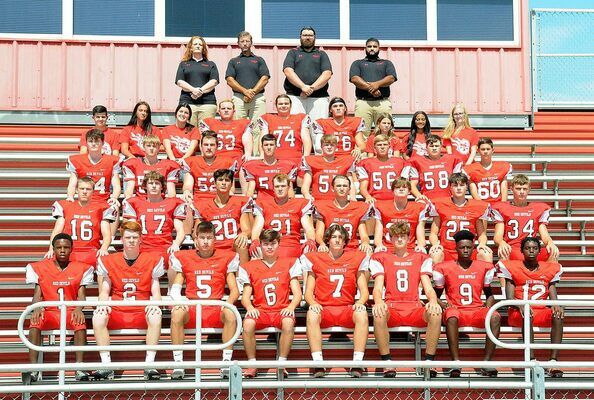 South Fulton High School’s Head Football Coach Eric Knott has a total of 15 years under his belt as member of the Red Devils Coaching Staff.

When the 2022 season opens on Aug. 19, Coach Knott will be assisted by Zack Vaughn, in his second year on the staff, as OL/DL Special Teams Coordinator; Jacob Hyde, also in his second year with the Devils, specializing as coordinator for RB/LB; Jaquay Garmon, in his inaugural year on the sidelines as part of the coaching staff, focusing on - QB/DB; and Jamie Knott, who is in charge of team Fundraising and the 2022 team Managers.

This year’s Red Devil roster includes 19 players returning, 17 of whom saw significant playing time on the field during the 2021 season. There will be eight team members joining the Red Devils’ high school team for the first time.

According to Coach Knott, this summer’s conditioning, training and work out sessions were “the best we have ever had, with near 100% attendance.

“The kids worked hard, encouraged each other and stayed after to work on their skill set,” the Head Coach said.

“These are my seniors and they are doing a good job of encouraging the young guys and helping learn their roles,” Knott said adding juniors Will Clapper and Luke Morris have also exhibited leadership qualities.

When it comes to assets, the substantial number of team players with significant experience on the field, as well as increased athleticism on the roster will provide a boost.

On the flip side of the equation, with only four Seniors, the 2022 Red Devils will be an extremely young team and according to Knott, must find a way to build depth.
“That means Freshmen and first year players will have to step in and help out,” he said.

With what Knott describes as “fantastic coaching staffs and a ton of returning talent”, he sees McKenzie and Dresden as the toughest opponents this season.
With an intention to produce more air time for the football this year, Knott said Quarterback Brady McFarland will be a key factor.

“He has increased his arm strength and technique this Summer. Coach Garmon has done a fantastic job with him,” Coach Knott said.
Wide Receivers Conner Allen, Connor O’Neal, Dane Cirkles, and Harley Nagel will have to rise to high expectations, he added.
“You have to look at Center which, in my opinion is the toughest spot to play on our team. Braden Costello has stepped into that role and has took to it like a duck to water. Coach Vaughn has done an excellent job teaching him how to snap and how to make the necessary checks needed to keep the pocket clean during pass protection. Will Clapper, Dallas Whitehead and Josh McKnight will be huge for us in gaining tough yards inside and catching the ball out of the backfield. Luke Morris is also key as a guard. He has been a three year starter for us and is most dynamic lineman,” Knott said.

Defensively, in running a new scheme, the Red Devil safeties will be considered paramount in making the defense a stronger unit.
Will Clapper, Bryant Kimmons, and Dallas Whitehead, down safeties, are learning and adapting well to their new roles, with Connor Lawrence, Harley Nagel, and Brady McFarland at Free Safety.

Those three, in reference to Lawrence, Nagel and McFarland, Knott said will have a tough job of directing the secondary and checking into the proper coverage.

“All three are excellent Free Safeties and I feel comfortable with either of those three on the field. Dane Cirkles, Conner Allen, and Connor O’Neal are great CBs and are able to play man coverage or zone and come up and stop the run.,” the Head Coach said.

At Line Backer, a change has taken place in how the team will approach the plan, with Coach Hyde having provided the teaching tools for reads and how to adjust coverage to the formation.
“Zach Hannon is the leader of this group. Nate Little, James Pergande, and Tim Davis will all see significant playing time,” Coach Knott said.

As to pre-season scrimmages, there were no surprises.

“We have seen what we expected to see. Some good, some not so good. The effort and enthusiasm for the most part has been there. Those are the two things we have concentrated on the most. Poise and confidence are some other things we have focused on and those two have been hit or miss. Tackling and technique is improving. We are headed in the correct direction, we as coaches just need to make sure that we continue in that direction,” Knott said.

“The infusion of youth into the staff has been a good thing. In fact it has been fantastic thing. The energy, the optimism, the willingness to learn and talk and try new things is something that we needed. It is something that I needed. It has opened my eyes to some things we needed to do differently and that I needed to do differently. In turn, the team has responded to us in a positive manner,” Coach Knott said.

The Red Devils open up on the road against Greenfield on Aug. 19.