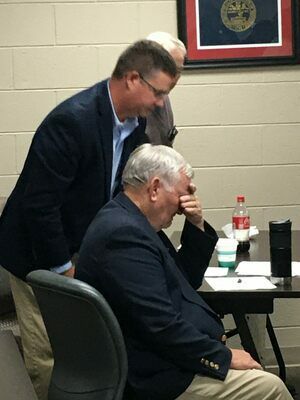 Nearing the close of Monday’s Obion County Commission meeting, the final meeting for Obion County Mayor Benny McGuire, following the Aug. 4 election, Commissioner Paul Albright thanked McGuire for his years of service to Obion County, and offered a proposed tribute to his legacy.

“Thank you, Benny, for your years of service. If it wasn’t for you, we would still be meeting in the Courthouse. Because of all you have done, I make a motion we re-name this office, the Benny McGuire Complex,” Albright stated.

Commission Chairman Ralph Puckett also praised McGuire for his contributions during his tenure.

“You helped get us out of debt,” Chairman Puckett said.

Visibly emotional, McGuire received a standing ovation from those in attendance.

Earlier on the agenda, McGuire addressed the county officials one last time.

“I have had a good run. I appreciate all that has been done for me. While I am here, I do want to recognize Commissioner James Gray, as he has become certified as a County Finance Officer, the first time a Commissioner has done that. I do care about the future of Obion County. I love this county and have tried to do what’s best to make it a better place to live, work and worship,” McGuire said.

The County Mayor then shared with the commission his thoughts on what he termed as things he considered to be positive, as well as negative.

“There are three things, to me, that have been good, I want to point out. One is the hotel-motel tax. It has brought in money for the county. I would like to recommend that money should go, 50% for tourism and 50% for economic development, where if an industry comes in and they need money, it wouldn’t have to be taken out of the General Fund. Another good thing is the Solar Farm. I know the farmers may not have been for it, as it seemed to mean they would lose farmland. But the airport has received 33% more money and the county gets the property tax....Then, the hot mix plant. The hot mix plant idea was first brought up in 1994 by the highway commission, but the law would not allow it then. After a feasibility study and the law changed, we were able to get the hot mix plant, which will allow for 25% more hot mix to be put out on our roads for the same dollars now. If we didn’t have it, we would also have to wait longer to get the hot mix,” McGuire said.

He then shared his view on the recent announcement of the Obion County School System’s intent to research the idea of a consolidated Middle School for Obion County.

“The county has been good to the schools. We have lost population every year. You could have cut them every year, but you didn’t,” McGuire said, in addressing the commission.

He went on to cite the county’s actions in maintaining aspects of the school system, as well as the county’s agreement to pave school property parking lots, at a cost he estimated to total approximately $150,000.

McGuire shared with the officials that the BEP (Basic Education Program) funding, which includes the formula through which state education dollars are generated and distributed to Tennessee schools, is set to change.

“It could be that they (the school system) will need to hire someone else at the central office. It has already been said they are top heavy out there. You have to remember there will be matching money, and possibly have to increase the school money and budget,” McGuire said.

He also referenced the proposal of a consolidated middle school, specifically.

“About this new Junior High school...they would have to buy land, at a cost of what could be $100,000-$200,000 for the land. I am all for sports, but academics is better. That consolidated school could put a strain on their transportation. They say it could save on staffing? Well, you would still need to have a principal and an SRO, plus there is more upkeep. It’s one more building for the county to have to maintain. And, in five years, I believe schools will end up closed at the east end and west end of the county. We would no longer be debt free...,” McGuire said.

He concluded his statement by saying he would be against the consolidation and against closing any of the schools, adding that the county commission, should they oppose the proposal of the consolidation process, they should “nip it in the bud” so that the school system would know how to proceed, or not.

A second amendment to the Economic Plan for Nathu Incorporated Hotel Project was approved, with information provided by Budget Committee Chair Sam Sinclair. Sinclair said the resolution regarding the project, often referred to as the Hampton Inn project, had already been passed by the Commission. The amendment was in regard to the TIF (Tax Increment Financing), to extend the commencement date for the allocation of TIF revenues, as a result of delays in availability of construction materials and labor due to the COVID-19 pandemic, with the developer identified in the original Plan requesting the second amendment.

Sinclair explained the new proposed start date would now be in October 2022, to provide the full 15 years for the building project. The commission approved the amendment.

A letter was presented to the Commission for review, from Union City City Manager Kathy Dillon, copied for the Union City Mayor and City Council; Obion County Commission and County Mayor; and the Joint Economic Development Council, to Rick Pease, Leasing Coordinator and Susan J. Hicks, Leasing Agent, in reference to to the city and county opting not to renew the lease for the Vocational Rehabilitation Center.

The letter states the city and county have been given an opportunity to repurpose the building for sale, at 1419 N. Morgan St. The letter further extends an offer to the Tennessee Department of General Services to consider another property previously occupied by the American Job Center at the Obion Count Industrial Training Center at 214 S. Second, at over half reduced rent of $5,000.
In the County Attorney’s report, County Attorney Steve Conley updated the officials regarding the “Opiod” case and settlement. He said Tennessee’s new Attorney General was originally in the negotiations for that lawsuit and would want to take it to the finish line.

“The lump sum of the settlement has been decided. But, what has not been determined is the dividing up between the counties,” Conley said.

Regarding the Solar Power project at the airport, Conley said he has continued to communicate with the FAA and the Tennessee Department of Transportation, as he continues to adhere to their requirements to “cross all T’s and dot all I’s.”

Conley shared with the officials he has and will continue to address concerns voiced at a previous commission meeting regarding the county’s ambulance service, owned by Priority One, but with Baptist still displayed on the ambulance vehicles. He said he had understood Priority One did not accept Blue Cross/Blue Shield, however Baptist did accept that insurance. Conley said he considered whether Baptist could be in breach of contract with the county, as it had been Baptist which made the agreement to provide the ambulance service to the county. He also said he had understood the hospital was not accepting county employees’ insurance. (Editor’s Note: following the adjournment of the meeting, it was determined that Baptist hospital does accept insurance of county employees, however the ambulance service does not.)

One item listed on the meeting’s agenda, ARPA Funds, was moved to be presented at the September county commission meeting, according to Budget Committee Chairman Sam Sinclair.

TYSON FEEDS IN TO FAITH AND FAMILY NIGHT FUN AT...