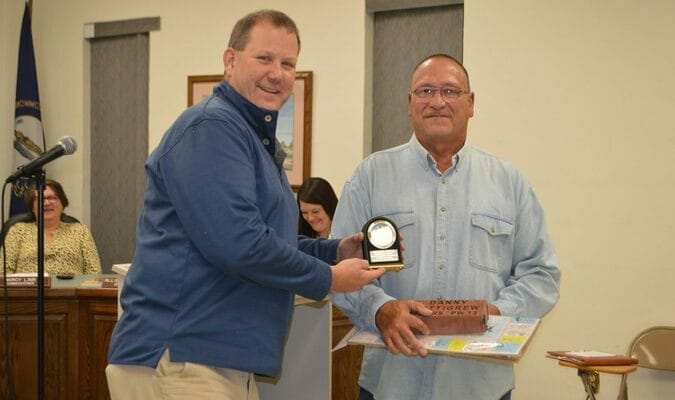 DECADES OF SERVICE – Preceding the Nov. 14 Fulton City Commission meeting, Danny Pettigrew, pictured above with Mayor David Prater as well as with his fellow Public Works employees was honored on the occasion of his retirement after 47 years of service to the City and citizens. (Photos by Benita Fuzzell) 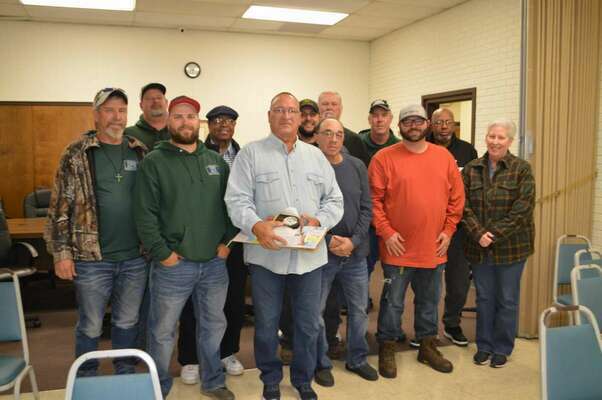 Preceding the regular business to be addressed by the Fulton City Commission Monday evening, longtime Public Works employee Danny Pettigrew, who has decided to retire, was recognized and honored for his 47 years of service to the city and its citizens.

“It’s been an honor and a privilege to work for this city. I have worked with a great bunch of guys,” Pettigrew said, after Fulton Mayor David Prater presented him with an engraved brick displaying his name, to be inserted in the walkway of Pontotoc Park, as well as a commemorative clock and a City of Fulton board game.

Pettigrew was also supported for the recognition by a large group of fellow employees from the Public Works Department, who wished him well upon his upcoming retirement.

During the voucher review, Commissioner Stokes said as he looked over the vouchers, he hoped what was showing was all of the Banana Festival expenses. City Manager Mike Gunn said there could be a few more outstanding.

Gunn presented for the Commission’s consideration, a job description for a part time Accounts Payable Data Entry Clerk version 2022.01. He reported he believed the permanent position would entail approximately 25 hours per week and the person who had taken on the job temporarily was not interested in permanent employment with the city.

Gunn said the transactions required had proven to be sometimes “overwhelming” and the new position was much needed. He said he planned to cross train the person in that position, once hired, to be able to take on other roles when needed, such as employee medical leaves.

Mayor Prater recited a Certificate of Commendation for Mr. Otis Melton, a resident of Fulton, to be honored by family and friends on Nov. 26, 2022 for the occasion of his 100th birthday.

In the Certificate of Commendation, it cited Mr. Melton’s birth place of Water Valley and his residence in the community of Fulton for 75 years. Mr. Melton’s World War II service, retirement after 38 years from the U.S. Postal Service, and his involvement and service to his church and civic organizations, as well as “his dedication and caring for the welfare of others, the commendation states, has earned the respect, love and affection of his fellow citizens from all walks of life and all ages....”

During the designated agenda entry for other business from each commissioner, Commissioner Stokes questioned whether the Commission would convene for the second regular session of the month of December, which would be Dec. 26.

Commissioner Linn asked about the status of several vehicles currently parked at the city dog pound. Gunn said his intention is to surplus the vehicles, which are police department vehicles, possibly to put them out for bids, along with other equipment.

Commissioner Stokes also asked about the status of a previously wrecked police department cruiser, and Chief Allen Poole, present for the meeting reported the vehicle had been repaired and was back in use by the department.

City Manager Mike Gunn announced a previously scheduled Rural Partners Network, RPN, public forum, set for Nov. 15-16 in Fulton had been postponed, as the result of a halt at the federal level on non-essential travel. Gunn said federal program representatives would be necessary and productive for the forum, so the event will be rescheduled.

The last item listed on the agenda was Municipal Order 2022-57, to adjourn from open session into closed executive session per KRS, for the purpose of discussions or hearings that might lead to the appointment, dismissal or discipline of an individual employee.

Upon return to open session, it was announced no action was taken.