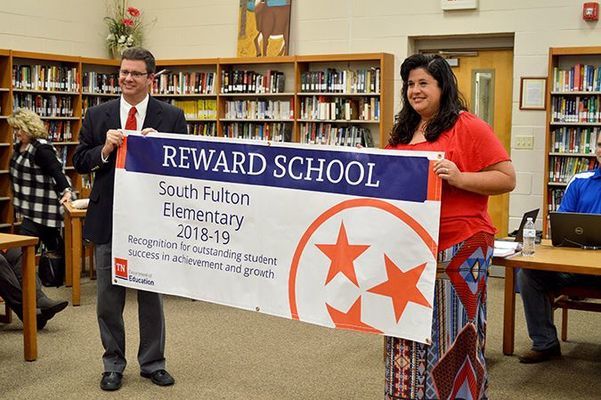 Preceding the meeting a reception for new teachers in the school system was held.

Jackson reported to Director of Schools Tim Watkins and School Board members Fritz Fussell, Keisha Hooper, Tim Britt, Barry Adams and Jared Poore that teachers Marina Greer and Leah McFarland were recently recognized as Educators of Distinction associated with their efforts working with the Middle School Beta Club. She also shared with the board that SFHS senior Jenny Beth Brundige was beginning competition at the state high school golf tournament, and a group of leaders in the High School Beta Club had attended a Regional Beta Club Conference where their service project presented was chosen to compete at the national level. The group attending the regional conference was recognized for outstanding leadership, Jackson said.

Director of Schools Watkins honored two schools for their recent designation as Award Schools, South Fulton Elementary and Hillcrest. SFES Principal Laura Pitts was present to receive a banner from Watkins noting the distinction, for display at the school.

In the Director’s Report, Watkins reported to board members he planned to meeting with a representative of Trane on Oct. 10 at 3:30 p.m. at the board office. He invited the board members to attend the meeting, where a presentation will be made to the system regarding energy efficiency upgrades. Watkins said independent audits had already been completed by local energy companies, which would allow the system to have actual numbers for comparison with vendors’ recommendations.

He praised the 54 teachers within the Obion County School System who reached Level 5 status with the state, sharing with the board how fortunate students within the system were to have the caliber of educators in the classroom to teach them.

Board members reviewed the personnel report, which included the resignation of Gary Owens, Bus Driver at Hillcrest and Mary Jean Dunn, Educational Assistant at Lake Road.

With the 2008 approved adoption of the Code of Ethics for the Obion County School System, subsequently the Code of Ethics was adopted in Policy form and requires the Chairman of the Board to appoint, with Board confirmation, three members to serve one year terms on the Ethics Committee. According to policy, at least two of the members must be Board members. Serving via appointment and confirmation for 2018-2019 were Barry Adams, Jared Poore and Nancy Hamilton with George Leake replacing Hamilton, who retired. The committee is required to convene as soon as practicable to elect a chair and secretary.

Per recommendation by Dale Hollowell and approval by the Board, appointments to the textbook adoption committees pursuant to Tennessee Code Annotated, for the English/Language Arts, Hospitality Management and Criminal Justice committees for the 2019-2020 school year were announced.

With the solicitation of bids for an EES agreement, two bids were received, with Director of Schools Tim Watkins recommending the approval of the bid from CDW for $39,024. A bid was also received from CDI for $43,896.

Watkins recommended the approval of the bid from System Liquidation.

The board approved both recommendations from the Director.

Three amendments to Board Policy, 1.101-Role of Board of Education, 1.2021, Boardsmanship Code of Conduct, and 1.202, Duties of Board Members, were approved, with a recommendation from Dr. Watkins, for second and final reading.

Two amendments were considered by the board, for approval of first reading, one regarding Code of Conduct and one for Class Ranking.

Amendments to Board policy 6.300, Code of Conduct, for consideration, regarded rewards for positive behavior, removal of privileges, and parental counseling. District Code of Conduct shall be followed after alternative disciplinary practices have been exhausted. Another amendment was in regard to utilization of trauma-informed discipline practices in dealing with students who have been identified as having adverse childhood experiences or trauma: restorative practices, RTI2B, multi-tiered system of supports, and behavior intervention plans, as disciplinary options.

Regarding Class Ranking, a change to policy 4.602, to be a graduate of the Obion County Challenge Program, the student must have completed, as part of graduation requirements, al high school requirements for college path, including foreign language and fine arts; have 95% attendance rate for four years of high school; take at least 50% of the school’s Advanced Placement/Dual Enrollment courses over four years, have a final grade of 85 or above in all courses, take four sciences, have an acceptable discipline record with no out of school suspensions and beginning with the class of 2023, have at lease a composite score of 21 on the ACT.