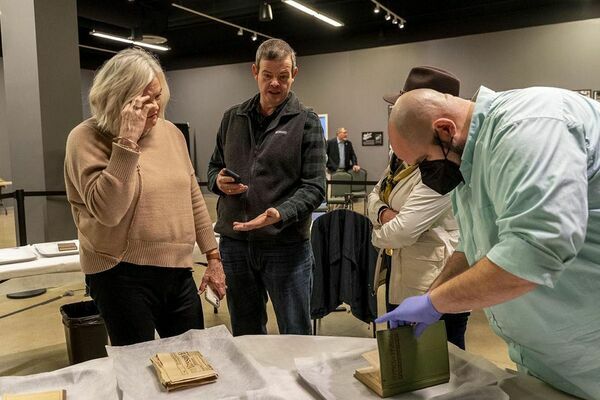 MEMBERS OF DRESDEN'S METHODIST CHURCH WERE ON HAND AT DISCOVERY PARK FEB. 2 FOR THE OPENING OF THE RECENTLY DISCOVERED CORNERSTONE FROM THE CHURCH BUILDING

Union City, Tenn.—Church members from Dresden First United Methodist Church in Dresden, Tenn., were present at Discovery Park of America on Wed., Feb. 2 for the opening of a copper cornerstone box that was discovered during demolition of the church building. The church had been damaged beyond repair by tornadoes this past December. The cornerstone box was found bricked inside a part of the church that was dedicated in 1924 and was previously unknown to many of today’s church members.

Jennifer Wildes, the museum’s senior director of collections and exhibits, managed the opening of the box assited by Jade Walsh and Jamie Thomson. Each artifact found inside was thoroughly examined and cataloged. In the coming weeks, the items will be put on temporary display at Discovery Park.

“Of all the artifacts we discovered, the most meaningful for me was a typed letter from the church’s pastor at the time, S. L. Jewell,” said Wildes. It included a short history of the church, and he noted that the letter had been ‘hastily written for information of someone who may in coming years look in the box.’”

The majority of the items were well preserved with the most unexpected item being an ear of corn. A letter wrapped around the ear noted it was of the Little Willice variety and was placed in the box by E. E. Ellis, the Weakley County agriculture agent. Ellis wrote, “May God’s richest blessings be with each farmer and those that depend on farmers as long as good old Weakley County continues to be populated with people.”

Other items pulled from the box included:

Copies of the Dresden Enterprise newspaper from 1924

Tube containing a document from the Boy Scouts of America

Correspondence relating to the building of the church

A 1920 photograph of a young church member, Norma Leone Lewis, discovered inside a hymnal

“To say we were overwhelmed with joy in discovering this cornerstone box would be an understatement to say the least,” said Jamie Kemp, chairman of the trustees of the church. “Watching the staff of Discovery Park as they uncovered and preserved these precious memories gave me great joy.”

Discovery Park has uploaded photos of many of the items to a blog on their website, DiscoveryParkof America.com.

Church leaders are in the process of planning where and when their new church building will be built. Contributions to the Dresden First United Methodist Church rebuilding effort may be made online at GoFundMe.com, or checks may be mailed to: